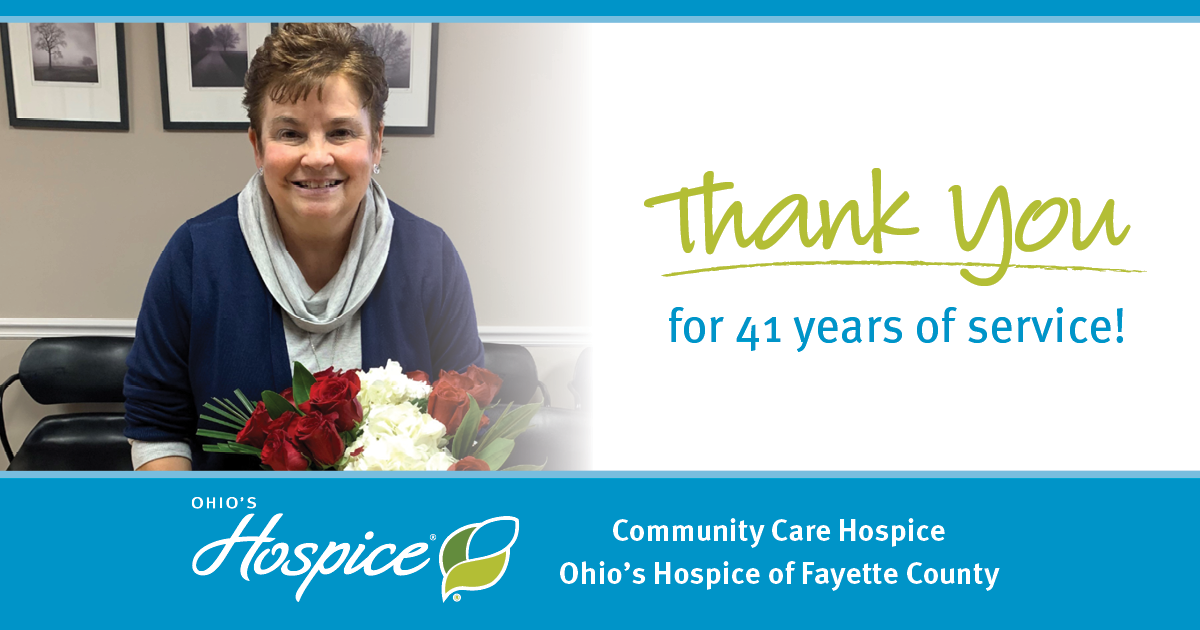 From a young age, Danita McFadden knew she wanted to be a nurse and help people feel better. When she visited her grandparents, she would get her grandfather a cool cloth for his head when he laid down for a nap.

“He would say, ‘Thank you. That feels so good,’” she recalled. “The satisfaction I got for making him feel better made me feel good, too.”

“Since I was six years old, I wanted to be a nurse,” McFadden said. “It was so satisfying to help my patients feel better and build relationships with them.”

McFadden graduated from Mount Carmel School of Nursing in 1979 and started at Fayette County Memorial Hospital immediately as an obstetrics nurse.

“While I was in obstetrics, I saw life come into the world so many times in so many ways, and it was such a miracle,” McFadden said. “You know when it’s time, there are emotional and physical responses you see. It’s the same in death. We have outward and emotional reactions in those moments.”

After 30 years, her career in obstetrics ended when the hospital closed its birth center. So, she worked in the emergency department at the hospital for a couple of years. That was where she met Missi Knisley, who is now executive director of Ohio’s Hospice of Fayette County and Community Care Hospice. After talking with Knisley, McFadden learned about an opportunity to become a hospice nurse.

“I had watched life come into the world for 30 years,” she said. “I always wondered what being on the other end of the spectrum of life was like.”

She interviewed for a position with Ohio’s Hospice of Fayette County and was hired in August 2012. The transition to hospice care showed McFadden that even on hard days, there were things to learn and people to support her.

“The Ohio’s Hospice team makes you feel so welcome and prepares you well for what you’ll see during patient visits. I was given the tools and supplies I needed to feel ready for whatever patients needed,” McFadden said. “I learned that dying is a lot like being born. It is a process. It is letting a soul come to rest after their journey in life.”

Switching nursing fields showed McFadden that not all nursing is the same, and it made her appreciate a new field even more.

“The patients become a part of you,” McFadden said. “There’s a deep connection you can build when you sit down with patients. Some of the families I cared for will be with me for the rest of my life.”

In addition to learning a new nursing field and providing care to a different age group, McFadden said her time in hospice care helped her learn more about death.

“Watching someone go from ill to taking that last breath changes you and impacts the whole family,” McFadden said. “It made me realize there are things about dying and what the patient goes through that you don’t know about unless you spend a lot of time with them in that phase of life.”

McFadden said the patients that she remembers are the ones that she was able to form strong relationships with through small things. “There are things I see, like Honeybell oranges, that remind me of a patient,” she said. “The Cleveland Browns remind me of another patient who was a great fan.”

As a nurse for 41 years, she brought dignity, quality of life, physical and emotional care, and spiritual care to her patients. “I was able to participate in 1,500 deliveries in obstetrics, and I delivered 25 babies on my own,” she said. “I don’t know how many souls I said goodbye to as a hospice nurse, but I will never forget them or their families.”

Ohio’s Hospice is a partnership of mission-driven, not-for-profit hospices in Ohio committed to a shared vision of strengthening and preserving community-based hospices. Members of Ohio’s Hospice share the values of serving each patient in an atmosphere of hospitality, respect and caring; attending to the social, physical and spiritual needs of each person we are privileged to serve; preserving and enhancing patient dignity; celebrating the life of each individual we serve; and reducing unnecessary suffering in the communities we serve.

This holiday season, Community Care Hospice invites the community to remember and celebrate loved ones…

As a way to remember and honor loved ones, Community Care Hospice and Ohio’s Hospice…

Recent Posts
© Copyright 2022 Ohio's Hospice, Inc. The logo and icon are registered trademarks of Ohio's Hospice, Inc. All rights reserved.
Back To Top
We use cookies on our website to give you the most relevant experience by remembering your preferences and repeat visits. By clicking “Accept All”, you consent to the use of ALL the cookies. However, you may visit "Cookie Settings" to provide a controlled consent.
Cookie SettingsCookie PolicyAccept All Cookies
Manage consent